Climate Impacts in the Southeast

The Southeast spans diverse landscapes from the Appalachian Mountains to expansive coastal plains.[1] Most states in this region are along either the Gulf of Mexico or the Atlantic Ocean, resulting in 29,000 miles of coastline.[2] Over 80 million people live in the Southeast, many of whom reside in cities, including Jacksonville, Charlotte, Atlanta, Miami, and New Orleans. Eleven of the twenty fastest growing metropolitan areas in the nation are found here.[3] 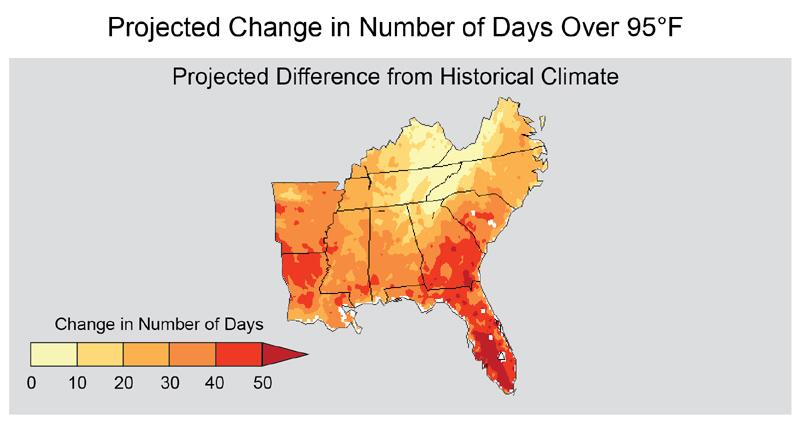 The number of days reaching temperatures over 95°F in the Southeast is projected to increase during this century. This graph compares historic patterns from 1971-2000 to future estimates for 2041-2070 under a scenario with high greenhouse gas emissions. Adapted from: USGCRP (2014)[1]

Climate change is causing increases in temperature across the Southeast. Since 1970, average annual temperatures in the region have increased by about 2°F, with the greatest warming occurring during the summer.[1] Temperatures are projected to increase by 4°F to 8°F by the end of the century. There are also more predicted days over 95°F and fewer predicted freezing events. Across the Southeast, temperatures will vary somewhat over space and time. Inland areas are projected to warm more than coasts. Natural cycles, including the El Niño Southern Oscillation, tropical weather systems, and differences in atmospheric pressure across key regions of the Earth, are anticipated to drive short-term temperature fluctuations.[1]

Heavy downpours have also increased in the Southeast. There has also been a substantial increase in the intensity, frequency, duration, and strength of Atlantic hurricane activity since the 1980s, and further increases are projected. However, in addition to some very wet periods, the region has also experienced periods of extreme drying. Projecting future precipitation for the Southeast is challenging because the region lies in the transition between an increasingly wet northern region and a drying southwest.[1] Areas in southwestern portion of the Southeast region may experience drier conditions, while the northeastern areas may experience wetter conditions, with natural variability having a strong influence on patterns across the entire region.[1]

Coastal populations and ecosystems in the Southeast are threatened by sea level rise, more intense hurricanes, and storm surge. Rising sea levels are driven by both increased warming of oceans and ground subsidence (sinking).[1][4] Many locations in the Southeast are extremely vulnerable to the impacts of sea level rise, including New Orleans and Miami. Projections indicate that sea level will rise more rapidly throughout the rest of this century and is expected to exacerbate existing threats in this region.[1]

The Southeast experiences hurricanes from both the Gulf of Mexico and the Atlantic Ocean. Hurricane winds and storm surges have caused extreme damage. In 2005, Hurricanes Katrina and Rita caused more than 1,800 deaths, eroded more than 200 square miles of coastal land in Louisiana, and destroyed personal property and public infrastructure.[4] Hurricane Katrina alone caused an estimated $134 billion in damages. Average losses caused by recent hurricane winds, land subsidence, and sea level rise are estimated to be $14 billion per year.[1] These costs are expected to rise in the future. 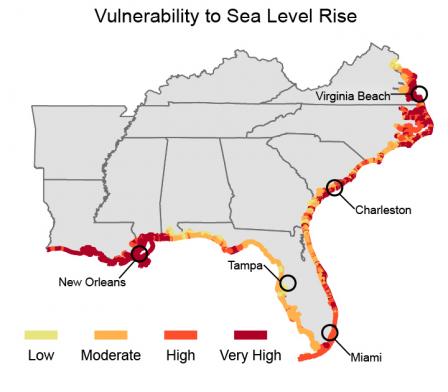 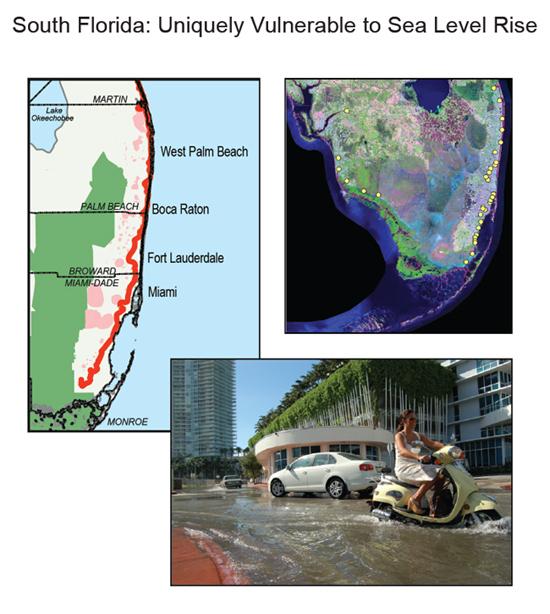 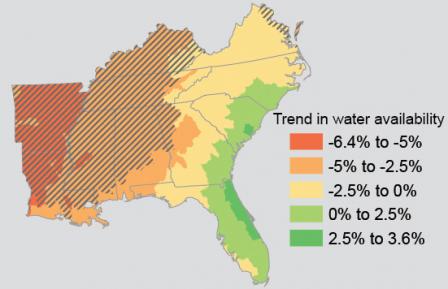 Water for agriculture, energy production, and use in homes and buildings is expected to decline across most of the Southeast away from the coasts (comparing decadal trends between 2010 and 2060, relative to 2010). The western part of the Southeast region is expected to see the largest water reductions in water availability. The hatched areas indicate where the predicted decrease in water availability associated with the range of climate scenarios is most certain. Modified from USGCRP (2014)[1]In general, the Southeast has had water resources capable of supporting local populations, ecosystems, agriculture, and energy production. However, parts of the region have experienced droughts, and anticipated population growth and changing land-use are likely to add further strain to the water supply.[1] Clean water availability is expected to decline in the future, resulting in new water resource management challenges.

Freshwater availability can be impacted by many climate-related factors. 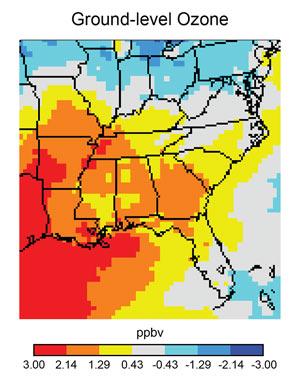 Ground-level ozone is expected to increase across most of the Southeast as temperatures rise. Ground-level ozone, an air pollutant, is a component of smog that is harmful to human health and may increase the likelihood of death. This map shows projected changes in average yearly ground level ozone concentration in 2050 as compared to 2001 in a scenario where greenhouse gas emissions are gradually reduced beginning around mid-century. (Figure source: adapted from Tagaris et al. 200940).
Source: USGCRP (2014)[1]Projected climate change will stress human health in the Southeast.[1] Higher temperatures and more frequent heat waves will increase heat stress, respiratory illnesses, and heat-related deaths. High temperatures also contribute to poor air quality, including the formation of ground-level ozone, which poses a risk to people with asthma and other respiratory illnesses. Ground-level ozone is projected to increase in the 19 largest urban areas of the Southeast, likely increasing hospital admissions due to respiratory illnesses, emergency room visits for asthma, and missed school days by children.[1]

Warmer waters have been linked to the spread of some bacteria. For example, food poisoning from eating shellfish infected with Vibrio parahaemolyticus bacteria is increasing, with new infections being reported over longer time periods during the year. As temperatures increase, the frequency of other climate-sensitive disease outbreaks are also expected to increase.[1] Harmful algal blooms and other disease-causing organisms may affect inland and coastal waters, where these types of events have not previously occurred. More algal blooms could increase rates of ciguatera fish poisoning, an illness caused by eating fish carrying toxins produced by the algae.[1]

Impacts on Ecosystems and Agriculture

Warmer temperatures could increase the number and intensity of wildfires, as well as outbreaks of damaging forest pests, including the hemlock woolly adelgid.[1] Declining freshwater availability, saltwater intrusion, land loss, drought, and increasing temperatures are expected to stress agricultural crops and decrease yields.[1] Some croplands may be lost entirely to inundation this century while production of crops that need chilling periods, such as many fruits, may need to shift northward with warming temperatures. High temperatures also cause heat stress for dairy cows and livestock and reduce production yields, potentially leading to relocation of these industries, or shifts to more heat-tolerant breeds.

Sea level rise will increase the salinity of estuaries, coastal wetlands, tidal rivers, and swamps. Rapid sea level rise could also eliminate some barrier islands that currently protect inland habitats, while reduction of wetlands increases the potential for loss of important fishery habitat. Ocean warming could affect seafood harvest in the Southeast by changing the species in the region, altering migration patterns and timing of fish presence, or affecting fish growth rates.[1]