Climate Impacts in the Midwest

The Midwest is home to more than 61 million people that largely reside in cities, including Chicago, Indianapolis, Detroit, Milwaukee, Kansas City, Cleveland, Minneapolis, and St. Paul. Outside the cities are expansive croplands and forests, the Great Lakes, and major river systems including the Ohio River, the Upper Mississippi River, and the Missouri River.[1] The Midwest is subject to extremely cold air masses from the far north, and warm, humid air masses from the Gulf of Mexico, resulting in a wide range of both temperature and precipitation extremes.[2]

The Midwest has gotten warmer, with average annual temperatures increasing over the last several decades. Between 1900 and 2010, the average air temperature increased by more than 1.5°F.[1] The rate of increase in temperature has accelerated in recent decades, particularly nighttime and winter temperatures. 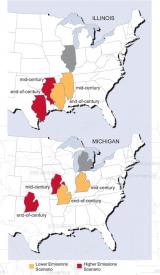 Projected change in summer temperatures under different warming scenarios. Summers in Illinois and Michigan might feel like current summers in Texas or Oklahoma by the end of the century. Source: USGCRP (2009)[8]

Click the image to view a larger version.Temperatures are projected to continue increasing across the Midwest, with the greatest increases in average temperature expected in northern areas.[1] Southern states will also experience more hot days, with a greater number of days over 95°F and fewer days below 65°F, which could lead to greater energy demand for air conditioning.[1]

Precipitation is greatest in the eastern part of the Midwest and less towards the west.[1] Heavy downpours are already common, but climate change is expected to intensify storms and lead to greater precipitation across the entire region during this century. Annual precipitation has already risen by as much as 20% in some areas.[1] Projections of future precipitation indicate that heavy downpours are likely to occur primarily in winter and spring months while summers will become drier, especially in the southern portion of the region.

In the Midwest, climate change is expected to negatively affect human health in a variety of ways and exacerbate existing health challenges. Major heat waves have been occurring more frequently across this region for many decades, resulting in increased deaths during these extreme events.[1][3][4] Heat stress is likely to increase in the future as a result of continued rises in temperatures and humidity in this region, resulting in more heat-related deaths and illnesses.[1] Air quality is already poor in parts of the Midwest and is projected to worsen with rising temperatures. Increased exposure to allergens caused by the lengthening of the pollen season is also expected to negatively impact human health.[1]

Warmer temperatures and changes in precipitation could increase the risk of exposure to diseases carried by insects and rodents.[1] Drinking water quality may also decline as a result of heavier rainfall events (see Water Resources section). 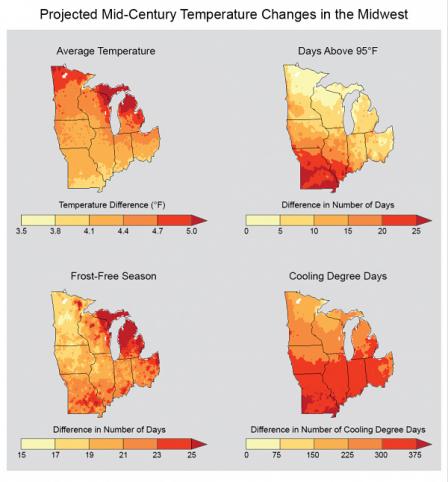 Midwestern temperatures are expected to continue rising. Average annual air temperatures are projected to increase in the near future (2041-2070) when compared to the end of last century (1971-2000) (top left). Increases are expected in both the number of days over 95°F (top right) and the number of days over 65°F (bottom right), when air conditioning may be needed. The length of the frost free season is also projected to increase (bottom left). Source: USGCRP (2014)[9]

Expected rises summer drought frequency and evaporation rates could reduce water levels in lakes and wetlands, as well as in important commercial waterways.[3][5] Disruptions in barge traffic along the Missouri and Mississippi Rivers have already occurred.[5] Changes in the Great Lakes are less clear, but water level decline may force reductions in the weight of cargo shipments and diminish the usability of coastal infrastructure, such as docks and piers.[1][3] 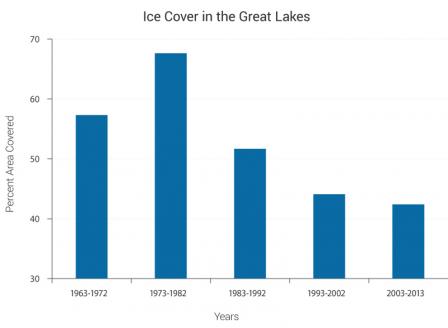 Winter ice cover in the Great Lakes has changed in recent decades. This figure shows the average maximum ice coverage by decade between 1963 and 2013. Reduced lake ice has contributed to observed increases in summer water temperatures.[1] Source: USGCRP (2014)

Click the image to view a larger version.The Great Lakes border many Midwestern states and are important for drinking water, transportation, commerce, and recreation.[6] Together, these lakes contain 84% of North America's surface freshwater, and provide drinking water to more than 40 million people.[1]

Impacts on Agriculture and Ecosystems

Climate change is expected to have many impacts on agriculture, forests, and other ecosystems in the Midwest.[1] Midwestern agricultural lands make up two-thirds of the region's land area and produce 65% of the nation's corn and soybeans.[1] Some climate-related impacts may provide short-term benefits for agriculture, but negative effects are also expected in this time frame. In the long-term, climate impacts are likely to have increasingly detrimental effects that increase variability in crop and agricultural production.[1][7]

Increased carbon dioxide levels in the atmosphere can stimulate crop production, and warmer temperatures lengthen the growing season. Soybeans may increase in yield early in the century because of the elevated carbon dioxide, but added stress due to increasing temperature is expected to offset this benefit later. Corn yields decline as temperatures warm because of a shortening of the reproductive development period. Yields of both crops could also be affected by an increase in disease-causing pathogens and delayed planting resulting from greater spring precipitation.[1][7]

Natural ecosystems in the Midwest are being altered by the combined effects of climate change, land-use change, and an influx of invasive species.[1] Forests are threatened by more frequent droughts, wildfires, and insect outbreaks. Many tree species are expected to gradually shift their ranges northward.

In the Great Lakes and smaller lakes in the Midwest region, increased temperatures are likely to affect fish species.[1] Warming waters are expected to reduce the abundance of many coldwater species, including brook trout, lake trout, and whitefish. Coolwater species, such as muskie, smallmouth bass, and bluegill are expected to increase.[8] The habitat of many fish species may also be degraded by harmful algal blooms, coastal erosion and flooding, and pollution runoff.[1]