Alaska is the largest state in the United States, accounting for about 20% of the total area of the United States and more than twice the land area of Texas. Alaska includes lands on both sides of the Arctic Circle, which makes the United States an Arctic nation. The state spans a wide range of climatic and ecological conditions that include rainforests, glaciers, boreal forest, tundra, peatlands, and meadows. Alaska contains 16 national wildlife refuges spanning 76 million acres and hosts 60% of the total area managed by the National Park Service, including the largest U.S. National Park (Wrangell-St. Elias with 13.2 million acres).[1][2]

Over the past 60 years, the average temperature across Alaska has increased by approximately 3°F.[3] This increase is more than twice the warming seen in the rest of the United States. Warming in the winter has increased by an average of 6°F [3] and has led to changes in ecosystems, such as earlier breakup of river ice in the spring. As the climate continues to warm, average annual temperatures in Alaska are projected to increase an additional 2 to 4°F by the middle of this century.[3] Precipitation in Alaska is projected to increase during all seasons by the end of this century. Despite increased precipitation, the state is likely to become drier due to greater evaporation caused by warming temperatures and longer growing seasons.[3]

Rising temperatures may provide some benefits in Alaska, such as a longer growing season for agricultural crops, increased tourism, and access to natural resources that are currently inaccessible due to ice cover, like offshore oil. However, climate change is also having adverse effects on many ecosystems and species, and is creating new hardships for Native Alaskans.

Permafrost is frozen ground that is typically located a few feet below the soil surface in extremely cold regions. Eighty percent of Alaska's surface lies above permafrost.[3] Permafrost typically remains frozen year-round, but as air temperatures rise, permafrost is thawing in many areas. As permafrost thaws, ice in the permafrost melts and can cause the soil above to sink, resulting in ground subsidence and damage to roads, homes, and other structures. The impacts of melting permafrost on transportation, forests, other ecosystems, and the economy could have widespread implications for Alaskans.

Climate change leads to more permafrost thaw and disruptions to freeze-thaw cycles that can increase frost heaves and subsidence. This can potentially cause damage to transportation infrastructure in Alaska, including highways, railroads, and airstrips.[4] Uneven sinking of the ground in response to permafrost thaw is likely to add significant costs to the maintenance and repair of transportation infrastructure and buildings.[3] Many of Alaska's highways are built in permafrost areas and are subject to damage if the permafrost thaws. Additionally, warming leads to a shorter period when ice roads are usable and a shorter season during which oil and gas exploration on the tundra can occur.[3] 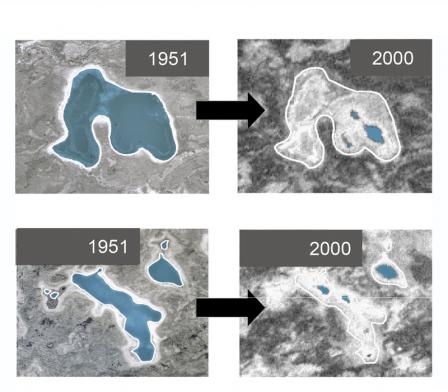 Two pairs of aerial photographs of pond areas in Alaska. The two images on the left show the pond areas in 1951 and images on the right show the same pond areas in 2000. The pond areas shown on top shrunk from 180 to 10 acres, and the pond areas shown in the bottom went from 90 to 4 acres in size. Source: USGCRP (2009)[9]Climate change is causing changes in lakes, ponds, wetlands, plant composition, and wildfires that impact human health, wildlife, and ecosystems.[3] Lakes are changing size, with most lakes shrinking in area in the southern portion of the state.[3] Surface waters and wetlands provide breeding habitat for millions of waterfowl and shorebirds that winter in the lower 48 states. These wetland ecosystems and wildlife resources are also important to Alaska Natives who hunt and fish for food.

Lakes get smaller through a combination of increased evaporation caused by warmer temperatures, permafrost thaw which allows lakes to drain more readily, and greater accumulation of decomposing plant material on lake bottoms caused by greater plant growth.[3] In areas where permafrost is discontinuous or fragmented across the landscape, lakes are expected to continue shrinking in area. Some lakes are growing in area because of lateral permafrost thaw, which causes the edges of the lake to collapse inward, thereby increasing the area of the lake. Lake growth is expected to continue in areas underlain with continuous permafrost.[3]

As the climate warms, shrubs are expanding into the tundra. In some areas, shrubs are replacing lichens and other tundra vegetation. Lichens are an important winter food source for caribou, and the loss of lichens can lead to declines in the growth and abundance of these animals. Caribou, in turn, are a critical food source for predators such as bears and wolves, as well as for some Alaska Natives.[5] 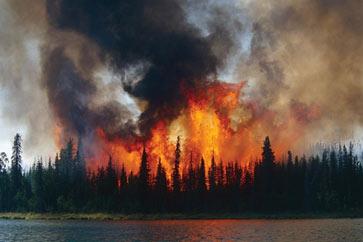 In recent years, an increase in large wildfires has been seen in Alaska. Credit: USGCRP (2014)Higher temperatures and drier conditions increase the risks of drought, wildfire, and insect infestation. Large wildfires have consumed more boreal forest in Alaska in the last ten years than in any other decade recorded, and the area burned annually is projected to double by 2050.[3] Fires change forest habitat, improving conditions for moose and some plant species, but reducing the lichen that caribou rely on in winter. Warmer temperatures are also expected to worsen insect damage to forests across much of the state, which may increase the area of standing dead, highly flammable trees that are especially vulnerable to wildfire.[6]

Sea ice is frozen seawater that floats on the surface of the ocean. Some sea ice persists from year to year (known as perennial sea ice), often getting thicker as it piles up against Arctic shorelines. Other sea ice is seasonal, melting during the summer and refreezing in winter. 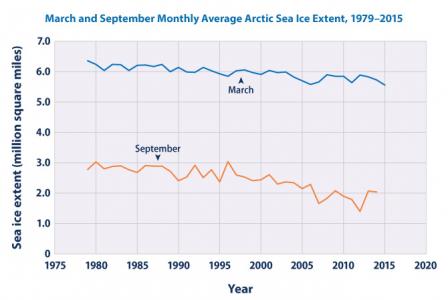 Click the image to view a larger version.Over the past several decades, perennial sea ice has declined. This decline is, in part, a result of extended periods of above-freezing air or water temperatures. Ocean currents and wind patterns have also played an important role.[7] September 2012 had the lowest sea ice extent (or area of ocean covered by ice) on record, 49 percent below the 1979-2000 average for that month. The September 2014 sea ice extent was nearly 700,000 square miles less than the historical 1979-2000 average for that month - a difference more than twice the size of Texas.[10] The thickness and age of sea ice is also declining throughout the Arctic, with recent measurements indicating a loss of 50% of sea ice since 1979.[3] Climate models project that sea ice will continue to decrease and indicate that the Arctic could be nearly ice free during the late summer by the 2030s.[3]

Diminishing sea ice is opening new opportunities for shipping, oil and gas exploration, tourism, and other economic activities. However, it also creates a pathway for invasive species and habitat loss for a variety of ice-dependent species, including walruses and polar bears.[3] Changes in sea ice can also affect the timing and location of plankton blooms, which can in turn affect the areas where commercial fisheries can thrive. Sea ice along the shoreline and permafrost in coastal areas help to protect human settlements from flooding and erosion. As coast erosion increases due to declining sea ice, residents are becoming more vulnerable.[3] 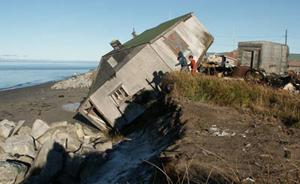 The ground under a home in Shishmaref, Alaska collapses from erosion.
Image credit: The Alaska Conservation Foundation (2010) ExitAlaska is home to 229 federally recognized tribes that are already experiencing the impacts of climate change in their everyday lives.[3] Alaska Native peoples depend economically, nutritionally, and culturally on fishing and hunting animals, including polar bears, walruses, seals, caribou, and fish. As the supply of fish and game decline, they are likely to travel onto thinning ice in search of food and are being forced to seek alternative food sources. Arctic plants and animals, including those harvested as subsistence food, are also at higher risk for diseases in a warming climate, further affecting food availability and human health.[3] 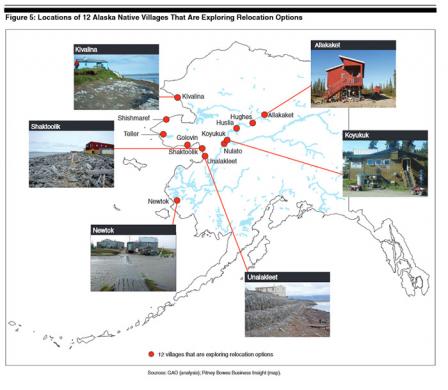 Locations of 12 Native Villages considering relocation. Source: GAO (2009)[11]The health of native communities is also threatened by loss of clean water, saltwater intrusion, and sewage contamination from thawing permafrost, as well as by the northward expansion of diseases. Warming also increases exposure to pollutants, such mercury and organic pesticides, that have been transported to Arctic regions and are released from thawing soils.[3]

Thawing permafrost, loss of coastal sea ice, sea level rise, and more intense extreme weather events are also increasing erosion and flooding along Alaska's northwestern coast. More than 30 Native villages are either in the process of or in need of relocating their entire village. In Shishmaref, Kivalina, and Newtok, for example, erosion is causing extensive damage, creating new dangers to residents, and deepening pressure to relocate.[8] However, due to high costs and land constraints, tribal communities in Alaska have been experiencing difficulty relocating to safer areas.

[11] GAO (2009). Alaska Native Villages: Limited Progress Has Been Made on Relocating Villages Threatened by Flooding and Erosion(53 pp, 2.2 MB, About PDF).